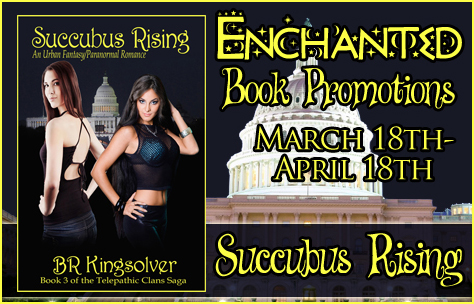 I’m happy to host an interview and book excerpt for paranormal romance novel Succubus Rising today. Let’s start with the interview, and then the excerpt. 🙂

I’ve only been writing fiction a couple of years. I’ve written and edited for newspapers and in the business world for a long time. But I never considered myself a good writer, or a good story teller, so I never tried to write fiction.

2)      Where did you get the inspiration for Succubus Rising?

Succubus Rising is the third book in the Telepathic Clans Saga. It’s a continuation of the story that began with The Succubus Gift and Succubus Unleashed. The story of Brenna and Rebecca discovering their powers and looking for love and their place in the world isn’t finished yet. That will come in the next book. The original working title was “In Succubus We Trust”, and the story was meant to be more about the Clans manipulation of the government in Washington. But the story took a different turn.

I can and do write almost anywhere. I’ve written in airports, hotels, restaurants, on planes … mostly I write on my couch at home.  I have a little one-pound netbook that I can take anywhere.

It took about two months to write, and six months to edit and revise. Actually, I wrote my first three books in about three months. Writing is easy. Writing well is not so easy, but I’m learning.

5)      How many parts will there be in the Telepathic Clan series?

I have one more book planned in the current series. The story I started out to tell about Brenna and Rebecca will be finished. The world of the Telepathic Clans will see more books, however.

I’m working on a detective, suspense story set in the same world. The main character is a telepathic private investigator. A few of the characters from my other books make an appearance, but the focus of the story is away from the O’Donnell Clan.

The three of them were walking along from the Wharf back to their car. Their protection team was being discreet and keeping their distance. A man stepped out from between two buildings with a gun.

“Just give me your purses and no one will get hurt.”

Rebecca and Brenna immediately braced, linking their minds and setting up a strategy for disabling him.

“What are you doing?” Rosie asked.

Confused, they looked at her, and then at the man with the gun. He stood frozen, not moving.

Rosie turned to him. “Give me the gun.” He walked over and gave it to her. “Now go find a busy street and play in traffic.” He turned and stepped off the curb, almost into the path of a car, walking off down the middle of the street. Rosie walked over to the curb and tossed the pistol in a storm drain.

“He’s a norm. All you have to do is control his mind. Wilders,” she said in disgust. “Lord, you were going to complicate things, weren’t you?” She continued down the street chuckling. 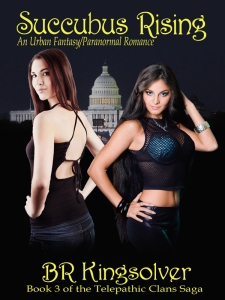 Rebecca Healy is a true wilder, growing up with no contact or knowledge of other telepaths. Discovered by a Clan member on the streets of San Francisco, she felt like she’d hit the jackpot. Finally, she knew what she was, or at least she thought she did.

When Brenna O’Donnell, long-lost heir of the O’Donnell Clan, and the strongest telepath in history, is returned to her family, she and Rebecca form a tight bond. Brenna has it all, looks, money, power, and men falling all over her.

Rebecca isn’t jealous, but it would be nice to find someone who would really love her and stick around in the morning. She’s intrigued by a handsome South American general, but of course, he has his sights set on Brenna. Carlos de Vargas wants more than love. His Clan has its back to the wall, and they hope for an alliance with O’Donnell. An alliance that would lead to war.

The story began in The Succubus Gift and continued in Succubus Unleashed. In Succubus Rising, questions are answered and new mysteries are revealed.

Purchase on Amazon or B&N. 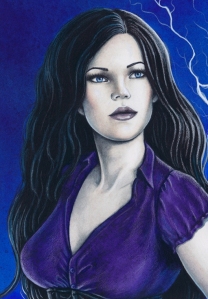 I made silver and turquoise jewelry for almost a decade, ended up in nursing school, then took a master’s in business. Along the way I worked in construction, as a newspaper editor, a teacher, and somehow found a career working with computers.

I love the outdoors, especially the Rocky Mountains. I’ve skied since high school and I’ve hiked and camped all my life. I love to travel, though I haven’t done enough of it. I’ve seen a lot of Russia and Mexico, not enough of England. Amsterdam is amazing, and the Romanian Alps are breathtaking. Lake Tahoe is a favorite, and someday I’d like to see Banff in Canada.

I have a very significant other, two cats and two Basset Hounds. I’m currently living in Baltimore, nine blocks from the harbor, but still own a home in New Mexico that I see too infrequently. 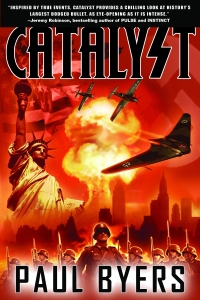 In the waning months of World War II, the allied armies advance upon the crumbling German war machine like a juggernaut. In a final desperate bid to save the Fatherland, a plan is conceived that could turn the tide of the war-the completion of an advanced jet-propelled bomber capable of delivering a deadly payload to the shores of America.

Captain Griff Avery of the OSS has just botched the defection of a prominent German physicist, a man crucial to the Nazi end game, letting him fall into the hands of the rogue SS General masterminding the plot. But Avery’s troubles have only just begun: overwhelming evidence points to the woman he loves as the German spy who foiled the defection.

Now under suspicion himself, Avery sifts through the lies and deceit, uncovering the treacherous German operation. Against orders and on the run, Avery is forced to wage a secret war of his own, recruiting the crew of a B-17 Flying Fortress and a reckless group of flyboys and their P-51 Mustangs to help him hunt down the secret SS cell and prevent the slaughter-no matter what the cost.

My brother is a World War II nut. He reads every book he can find on the subject, and he’s watched so many World War II documentaries it’s hard to keep count of. Since we shared a TV and books growing up, I’ve read a few books and watched a few documentaries on the topic myself, so I consider myself fairly knowledgeable on World War II. I found some things I thought were inconsistencies with how it really happened in this book. The protagonists are attacked by the Russians in France, but as far as I know the Russian army didn’t set foot in France during World War II. I asked my brother about this, and he confirmed my suspicions. There were a few other, minor historical errors that threw me a bit off-track but were perhaps necessary for the story and plot.

There’s a lot of explanation about how aviation works, and it’s clear that’s where the author’s true passion is. I didn’t find it distracting, because it interlatched with some action scenes or dialogue, but sometimes it did slow the pacing down.

I liked main characte Griff Avery. He’s a complicated, multi-dimensional man. I wasn’t too fond of his encounter with Anna at the start. She’s mugged, he rescues her, and they end up spending the night together and starting an affair. I found this highly unlikely. It would be plausible that afterward they got to know each other, but I absolutely hate all the love at first sight crap, and even if they knew each other beforehand, it’s clear they didn’t know each other that well, so I would’ve preferred if the reader was eased into the relationship rather than thrown into it.

I liked the action scenes, the secrets, the suspenseful plot twists thrown around here and there. The book was a bit slow at the start, and also a bit technical, but the pace really picked up halfway through. I like how the book featured so many different things, from secret pacts, to bombers, to plans that would change the outcome of war forever, to prison camps, to the horrors of war.

The writing was a bit formal at the start, and the characters could’ve used more groundwork early on, but since this is the author’s first novel, I’m willing to cut him some slack on both accounts.

If you’re a fan of World War II, thrillers, spy novels, or books that deal with aviation, give Catalyst a try. It’s an enjoyable read. 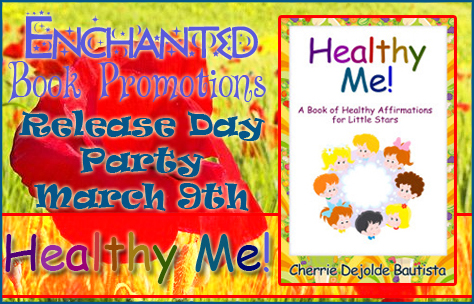 We’re celebrating the release day party of Healthy Me! today. The author was kind enough to offer 5 Kindle eBook copies of Healthy Me! as a giveaway. Scroll down for the Rafflecopter form to participate.

The giveaway runs from March 9th to March 14th and is international. 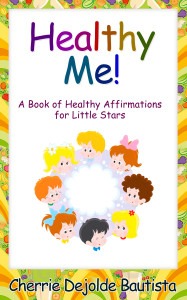 Healthy Me! is a book of healthy affirmations for little stars. Written to promote positive self talk to kids, Healthy Me! encourages children to have a healthy lifestyle — physically, mentally, and emotionally. This book is full of positive affirmations that focuses on taking care of one’s self while having fun doing it!

Don’t forget to check the end for your Bonus Gift to see how you can download a free ebook, you and your family will enjoy!

take care of myself.

I respect my self-image.

I’m proud of my health.

Cherrie Dejolde Bautista is a Certified Empowerment Coach committed to help everyone reach their fullest potential and be the best they can be. Having a technical background who worked as an Analyst/Computer Programmer, she pursued and became certified as an Empowerment Coach in her quest to understand how she can become the best parent for her kids. She realized that in order to raise her kids to be healthy, responsible, confident and successful individuals with a lot of respect for themselves, their family, other people, and life, she needs to empower herself not only to be the best parent, but also to reach her own fullest potential and be the best individual she can be. Being a good role model is the most effective way of teaching, influencing, and nurturing her kids. She teaches her children how to live by letting them watch her do it.

Win one of 5 Kindle eBook copies of Healthy Me!  The giveaway runs from March 9th to March 14th and is international. Click on the link below to be taken to the Rafflecopter form to participate in the giveaway.

If this form doesn’t work, go here to participate.
Click here for the Rafflecopter form!