We’re celebrating the release day party for “The Cross of Santiago” a time-slip adventure.  You can win an eBook copy of the book today! Scroll down to the Rafflecopter form to participate.

“I am running, barefoot across the cobbles.” “Where are you going?”

“To see Brother Thaddeus. I try to go there whenever I can, whenever father is away.”

Chris was sitting on a wicker chair that had in a former life graced his parents’ conservatory. He was sitting to the side of the treatment bed, where Amanda lay comfortably with her hands by her sides. He did not for one second take her trust for granted. However, he did feel slightly apprehensive about the fact that he had no idea what he was doing. He had read over and over the ground-breaking work of Dr. Brian

Weiss in ‘Many Lives, Many Masters’, and how he had struggled to understand what was going on, despite being a trained psychiatrist. His own credentials left a lot to be desired.

Still, there was one thing Chris knew for sure; simply because there is no explanation for something, does not mean it cannot exist. They would just have to explore together and as long as Amanda was happy to continue, he would be there for her, just like he promised her brother Jay. Her soft voice broke his pensive silence.

“It’s summertime; the bog cotton is growing like little white stars on the hillside.” “Where are you now Amanda?” he asked.

Chris felt his skin prickled by a million goose bumps. He was terrified and exhilarated all at once. ‘What is going on here?’ he wondered to himself. Even her voice had changed, she was still whispering, but like a young girl. She seemed to be more innocent and naïve.

“We’re in the garden behind the monastery. The cloisters protect the herbs and keep the air still. I bring Brother Thaddeus fish from the market and he’s teaching me to read. We speak only in English or Latin, he won’t talk to me as gaeilge; he says I can learn enough of that at home.”

“And how did you meet Brother Thaddeus”, Chris asked in a conversational tone. “I told you, I bring them the fish. The Brothers won’t come to the market.”

Chris’s voice grew softer and almost inaudible, while for Amanda, the sights and sounds of the medieval city grew brighter and louder. Until…….

The Cross of Santiago

“One cross will bind two couples across four centuries”

An ancient love story, locked in the heart of a sunken treasure, is destined to find its happy ending… even if it takes four hundred years to do so.

Amanda Morrison does not believe in love or destiny, but when a long­lost aunt leaves her a mysterious golden cross in her will, her uneventful life in Galway City is turned upside down. The arrival of Xavier, a charismatic yachtsman in search of treasure and adventure, complicates life further, as their paths seem destined to cross. While Amanda tries to uncover the truth about her family’s past, a strange series of events ensues involving hippy hypnosis, five­a­side football, scary sheep, and radical reincarnation. Though, not all in that order. 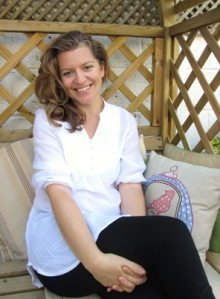 Evie has always been a storyteller. From a very young age, she held a captive audience (mostly with rope!) as she performed her party piece, which involved sitting on a high stool and telling extremely tall tales.

Things have moved on a bit since then and Evie’s love of storytelling has blossomed. Having published a number of short stories and articles for Irish magazines such as Woman’s Way and GalwayNow, she is set to launch her debut novel, ‘The Cross Of Santiago’, on September 16th 2013. A time-slip novel full of intrigue, humour and romance, it is an exciting blend of historical fiction and contemporary women’s fiction.

Evie lives on the West Coast of Ireland in Galway City, where she shares her home with two sewing machines, an easel and a guitar that refuses to stay in tune. She is greatly inspired by her hometown, which is not only the setting for her novel, but also the subject of her other passion, art. She has several paintings currently exhibiting at the local gallery, featuring vibrant streetscapes and quirky designs. Evie is currently working on her second novel and short story collection.

Win an ebook copy of The Cross of Santiago to celebrate the release day!